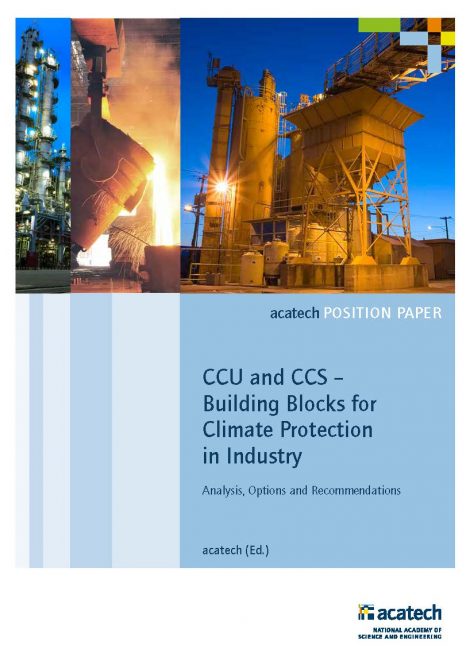 Germany wishes to cut its greenhouse gas emissions by 80 to 95 per cent by 2050. However, despite the success to date, the measures which have already been planned and implemented are not sufficient for achieving this ambitious goal. In addition to the energy sector, the largest source of greenhouse gas emissions, German industry is also responsible for releasing considerable volumes of global warming gases. In its Climate Action Plan 2050, the Federal Government has for the first time set a sector target for industry.

The present acatech POSITION PAPER analyses the options for (re)utilising and storing CO2 (Carbon Capture and Utilisation (CCU) and Carbon Capture and Storage (CCS)) which come into consideration for reducing greenhouse gas emissions from industrial processes. It is recommended that a wide-ranging public debate about the use of CCU and CCS be conducted in the near future. Only then will it be possible to take account of reservations about CCU and CCS, further develop suitable technology in good time and bring it to market maturity so that the necessary infrastructure can be planned, approved, funded and constructed.