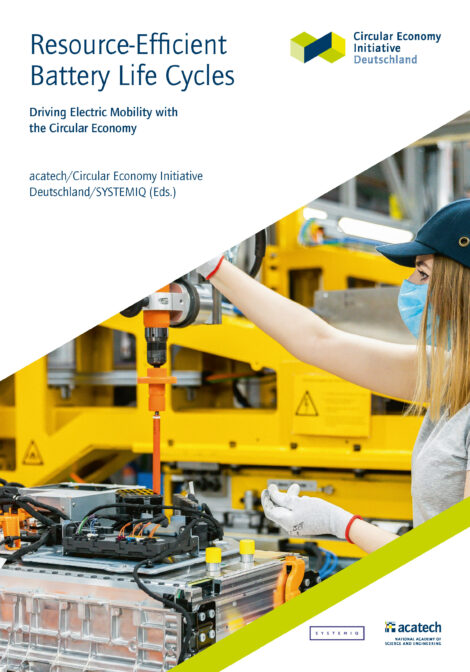 Between October 2019 and May 2020, the Circular Economy Initiative Deutschland’s Traction Batteries working group devised a roadmap for the establishment of a circular economy for traction batteries (the batteries that drive battery electric vehicles).

The report “Resource-Efficient Battery Life Cycles – Driving Electric Mobility with the Circular Economy” represents the main outcome of the working group’s deliberations. It discusses the opportunities, obstacles and potential conflicts of a circular economy for traction batteries, outlines a vision, presents plans for three pilot projects to accelerate the transformation and formulates recommendations for the main actors. Through this report, the working group’s members hope to support the initiation and long-term consolidation of a circular economy in Germany and beyond.

The working group’s 21 members are representatives of leading academic institutions, German businesses and organisations known for their expertise in the field of traction batteries. This composition allowed the group to achieve its goal of addressing the topic as holistically as possible.