Mobility survey: Public wants solutions that are more climate-friendly and tailored to urban and rural areas

How do people get about in Germany? How concerned are they about the impacts of climate change, and what changes do they want to see in our urban and rural mobility systems? acatech – National Academy of Science and Engineering commissioned the Allensbach Institute for Public Opinion Research (IfD) to carry out a study of mobility needs and patterns among the general public. In a representative survey, people were asked about their attitudes towards potential future mobility modes and technologies such as electric mobility, automated driving and carsharing. The survey reveals growing concerns about climate change, together with a desire for mobility solutions that are tailored to urban and rural areas.

1,301 people living in Germany and aged 16 and over took part in this representative survey. The results clearly show that the majority of people in Germany believe that the mobility and transport system needs to change and would also like to change their individual mobility behaviour. However, there are a number of major differences in the mobility behaviour and needs of people living in urban and rural areas.

Key findings at a glance:

The majority of people in Germany (61 percent) are very worried about climate change. 43 percent think that it is one of the biggest threats to global stability. 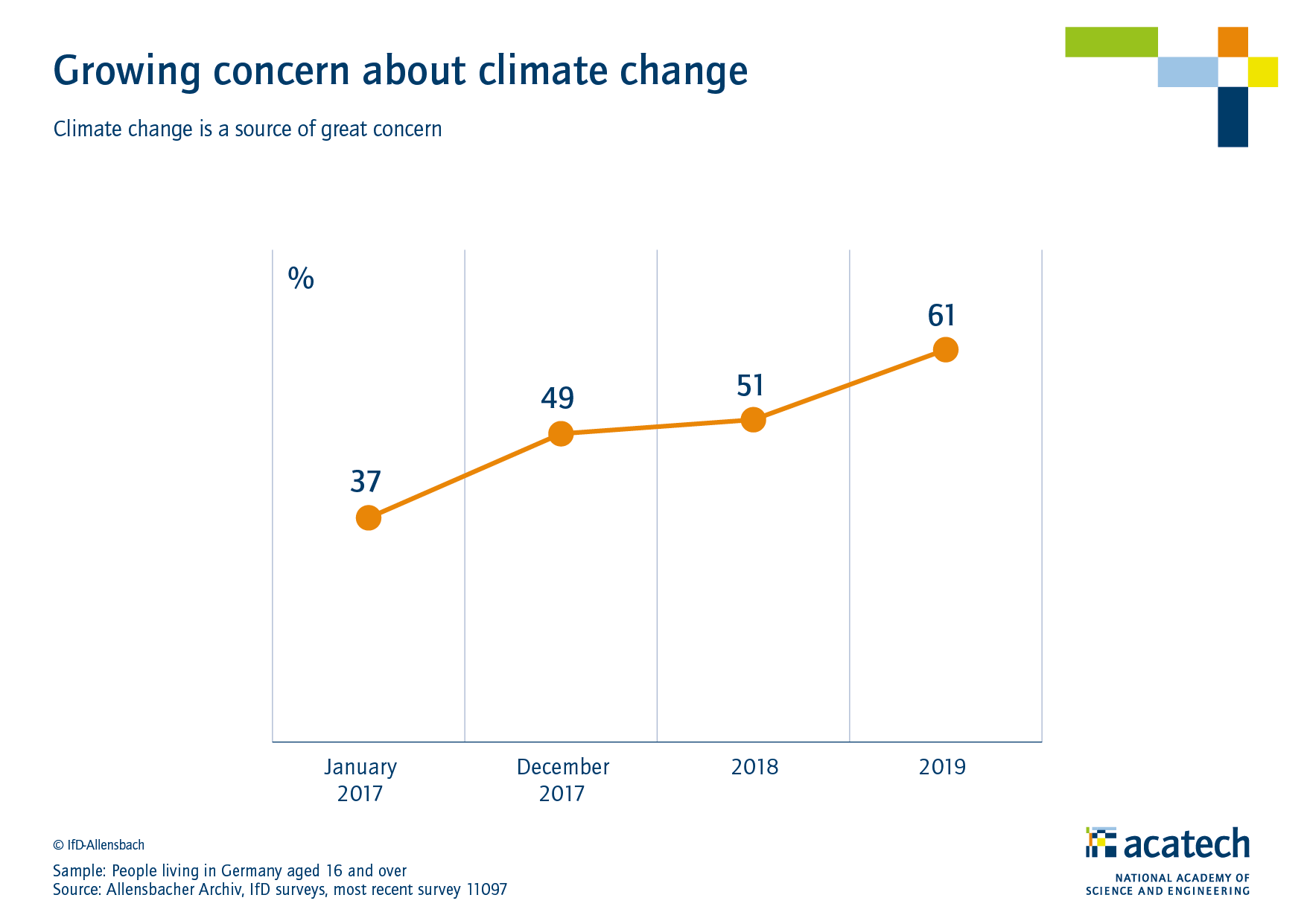 51 percent of the population believe that everyone should be doing more to protect the climate. 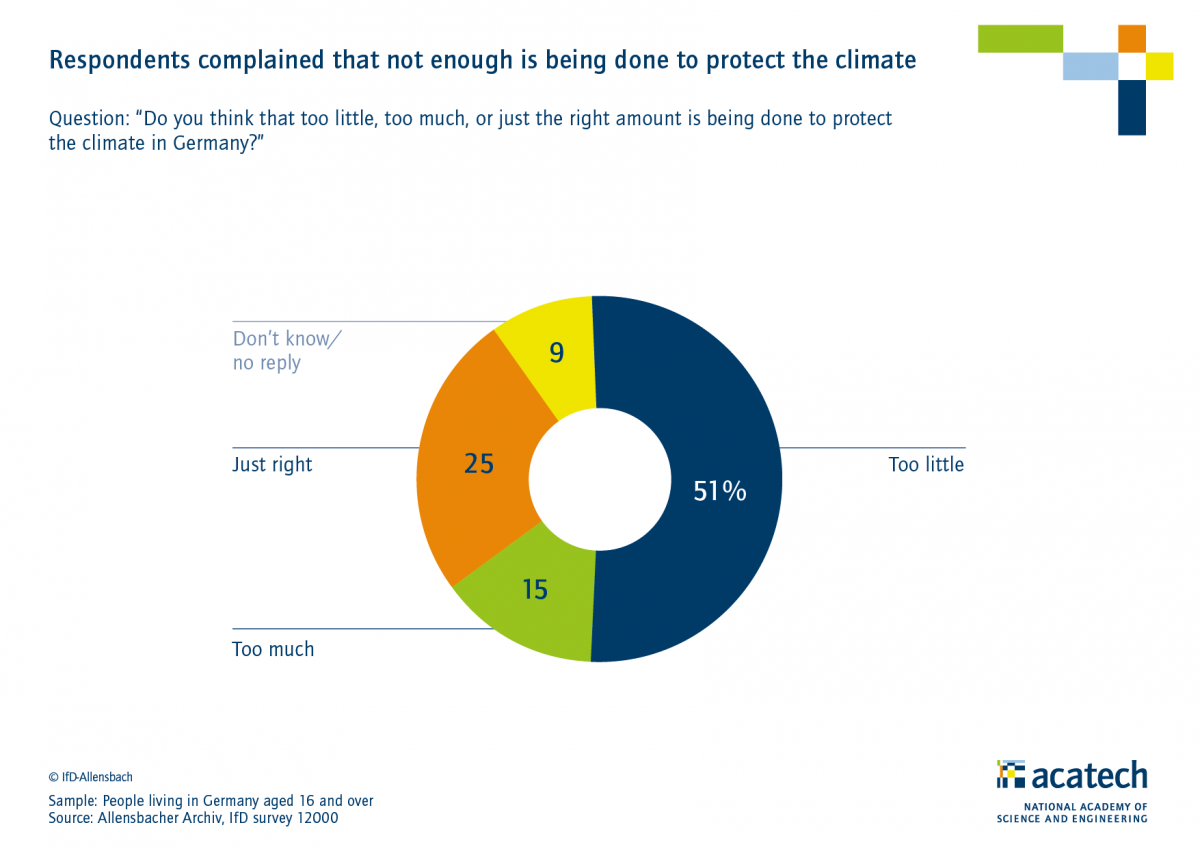 The majority of respondents think that emissions from transport have a very harmful impact on the climate and believe that the mobility sector’s harmful climate impacts can be reduced if the right measures are implemented. The most frequently cited measures are the expansion of public transport and new drive technologies. 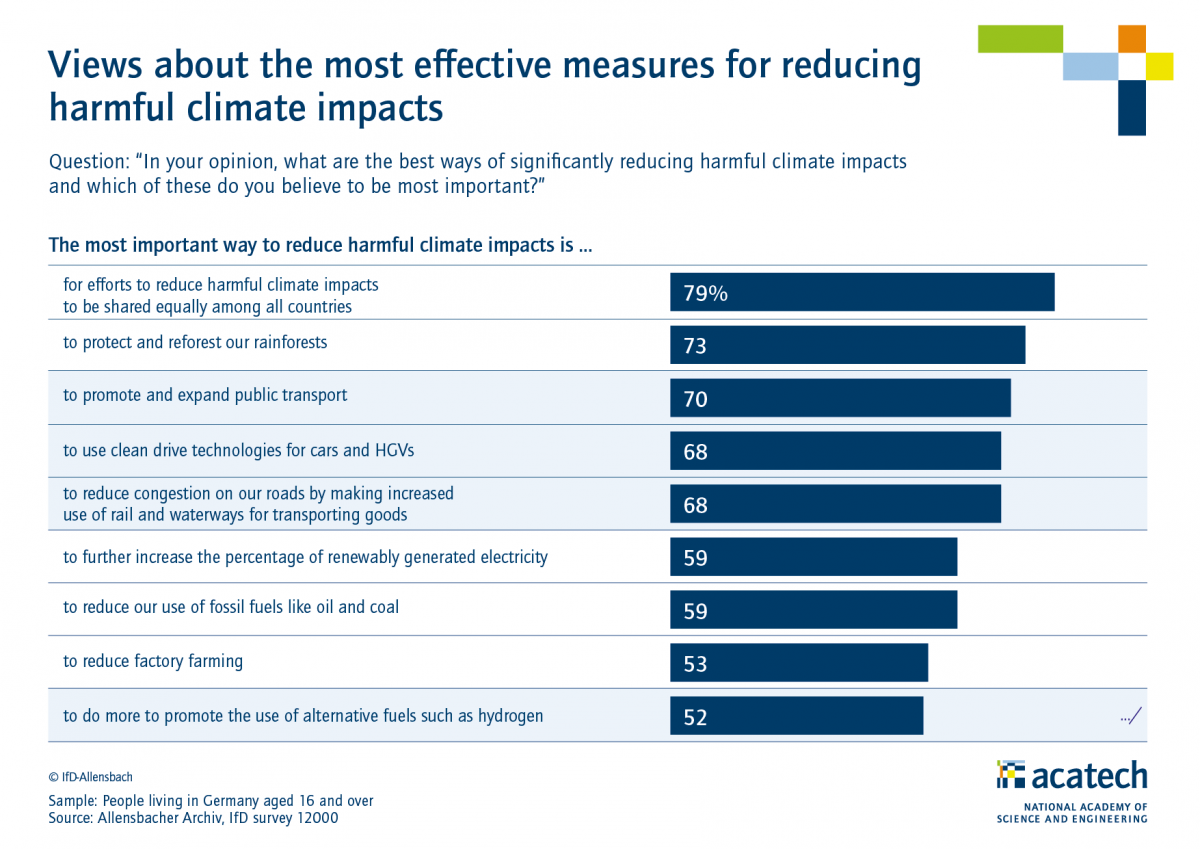 Doubts about the overall effectiveness of climate measures

Only one in four people think that measures in the transport sector can achieve a significant overall reduction in harmful climate impacts. This points to a dilemma: when faced with the prospect of measures that would force them to change their individual mobility behaviour, people question whether these measures would have a significantly greater climate impact – they are not convinced that the benefits would justify the action taken. 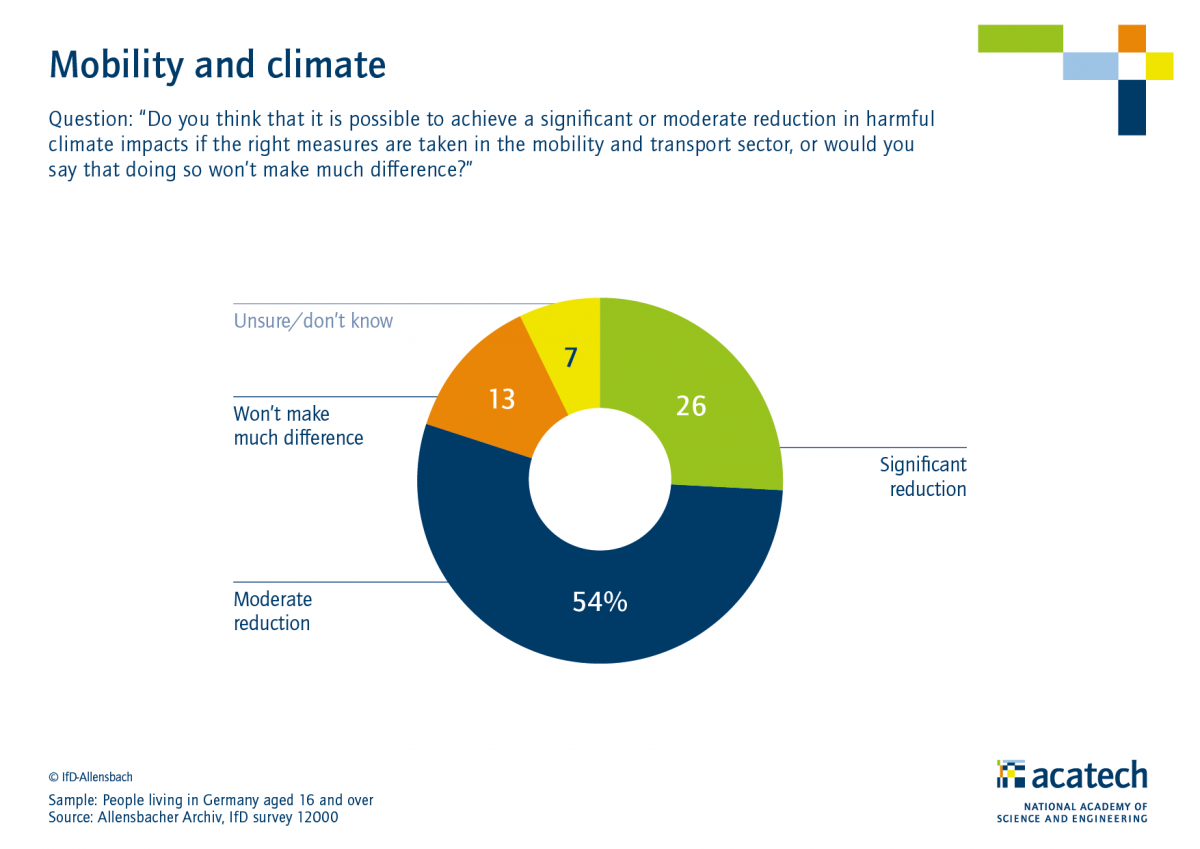 Opinion divided about changes to the mobility system

While 46 percent of the population believe that we need a fundamental overhaul of the entire mobility and transport system, 43 percent think that we only need to make adjustments to some individual areas. 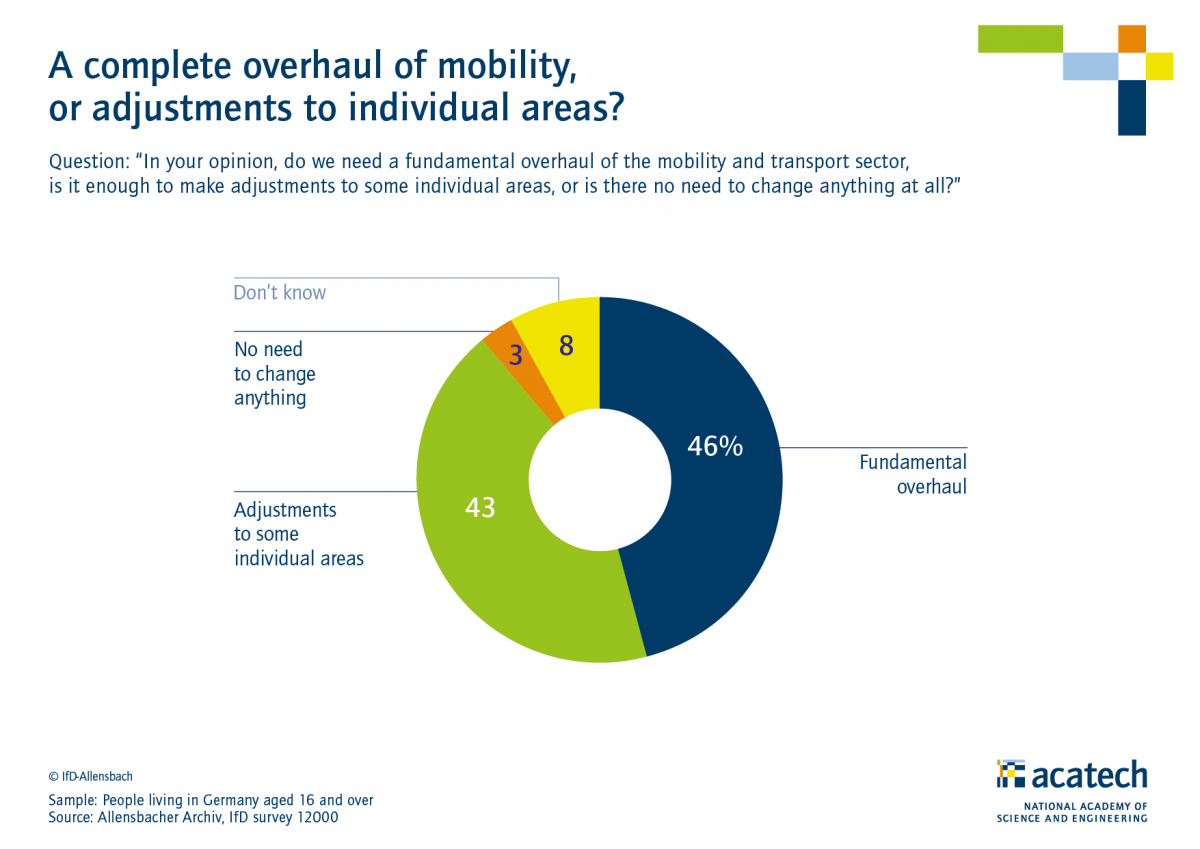 Nevertheless, the majority of people are conscious of the fact that current levels of mobility and our existing transport infrastructure are causing serious problems. Most respondents identified congestion, city centres blighted by traffic, air pollution and noise as the most problematic issues. 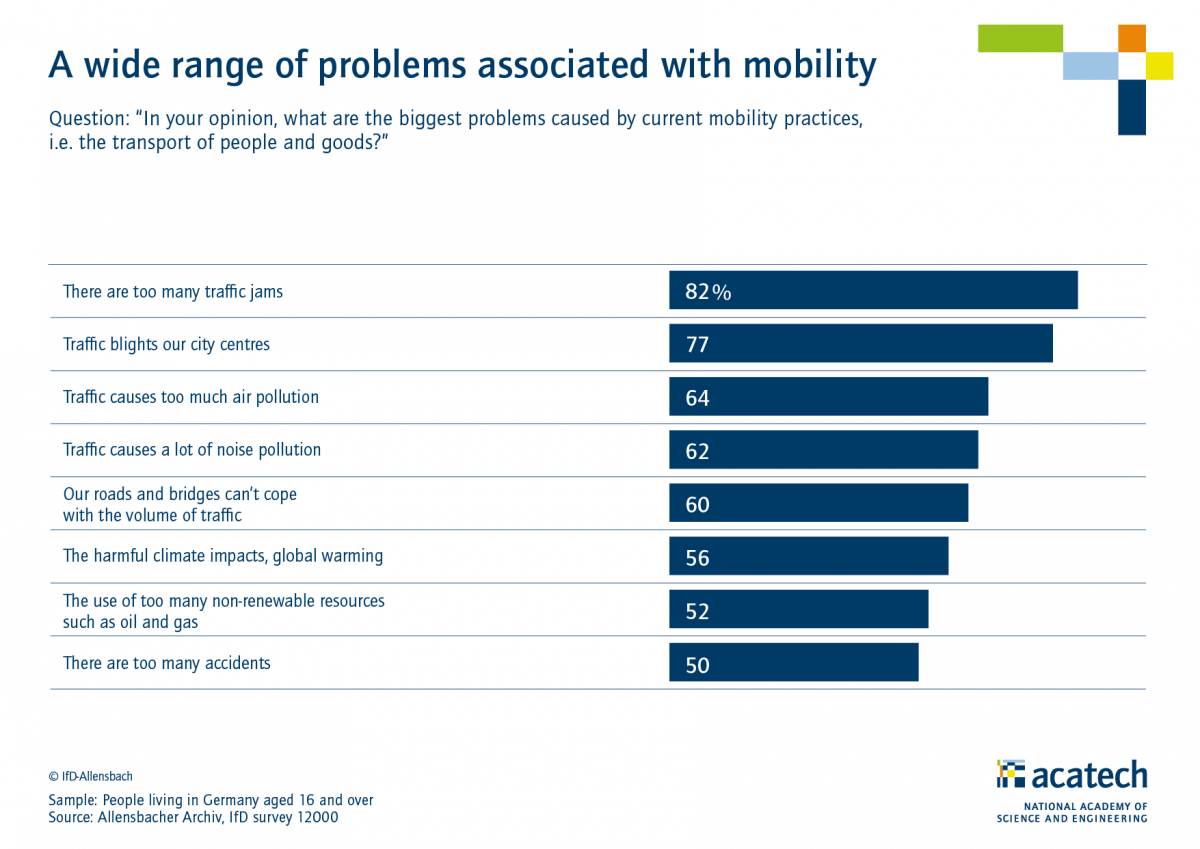 Three quarters of people want to change their own mobility behaviour. These changes include cheaper and more flexible transport, less dependence on public transport, more cycling and walking, less car use, eco-friendlier travel and travelling less in general. 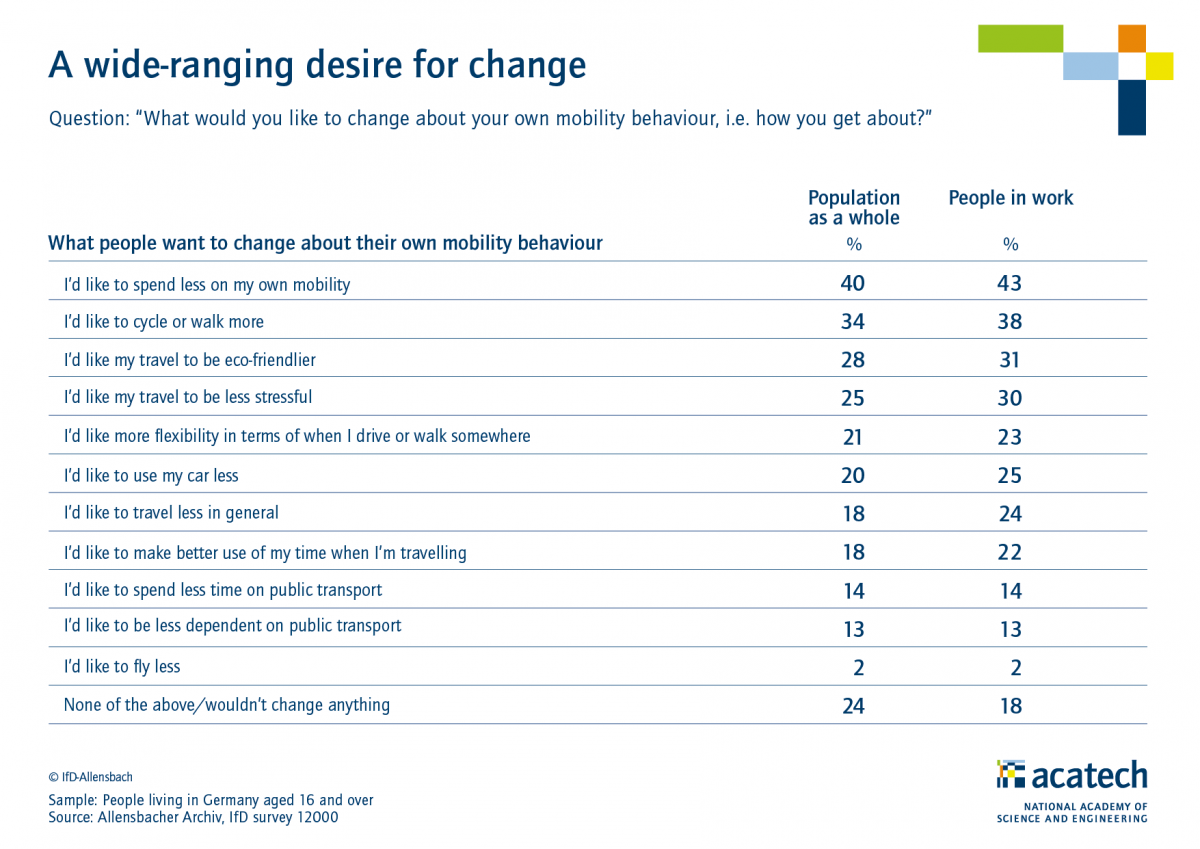 However, various factors are preventing many respondents from making the desired changes to their mobility behaviour. These include a reluctance to sacrifice comfort, longer journey times, higher costs, long journeys in rural areas, and a lack of public transport alternatives. 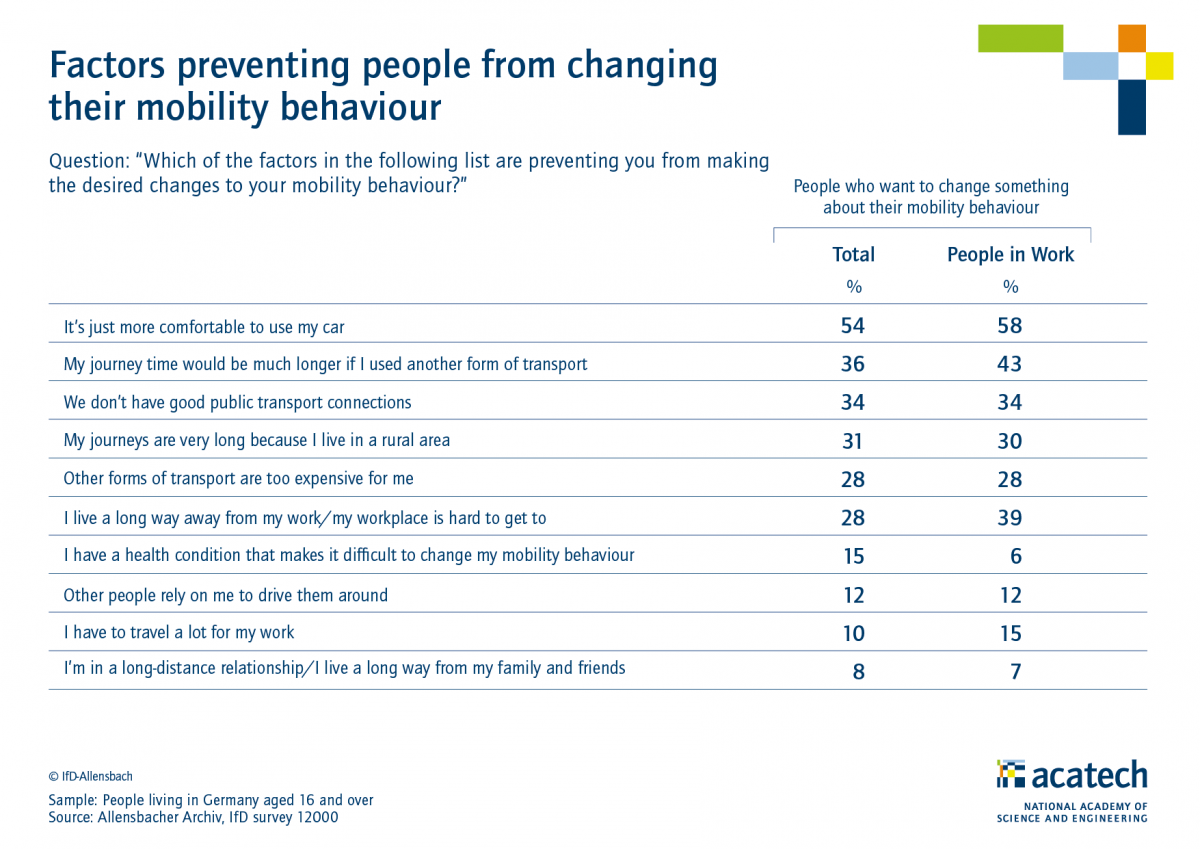 Different patterns of mobility in rural and in urban areas 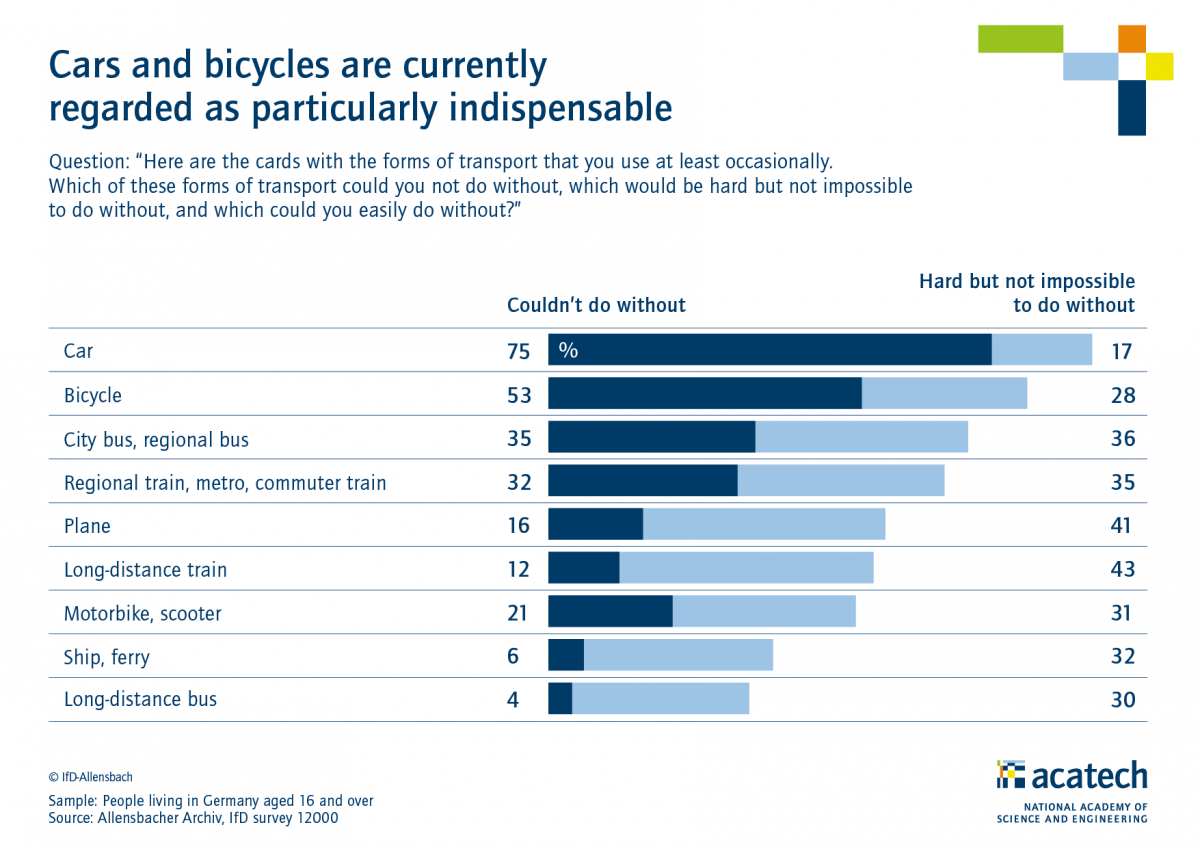 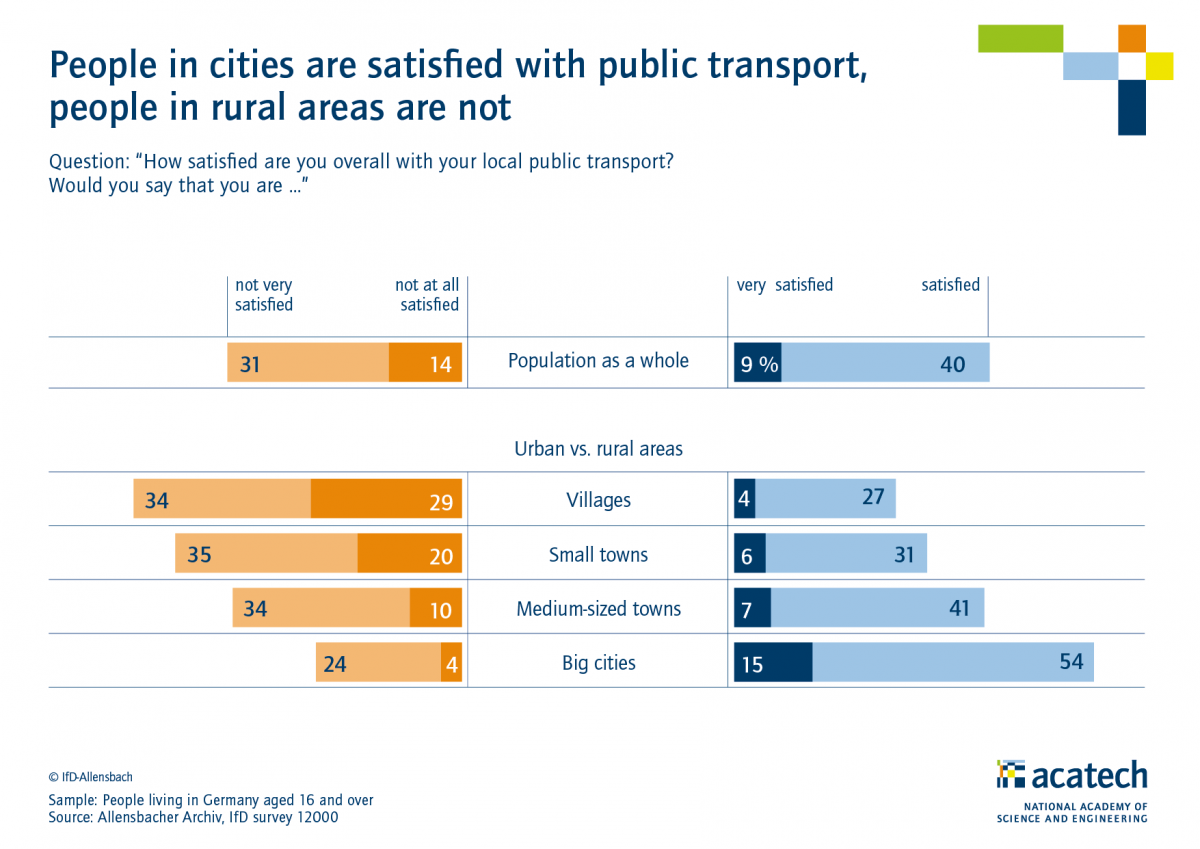 Views on the development of the transport infrastructure

In terms of the development of the transport infrastructure, the majority of respondents identified the following measures as particularly important: lower local public transport fares and long-distance rail fares, expansion of local public transport, upgrading of the road and rail network, increased use of rail and waterways for transporting goods. Their focus was thus mainly on the maintenance, expansion and optimisation of existing infrastructure rather than on new forms of mobility, towards which some people remain rather sceptical. 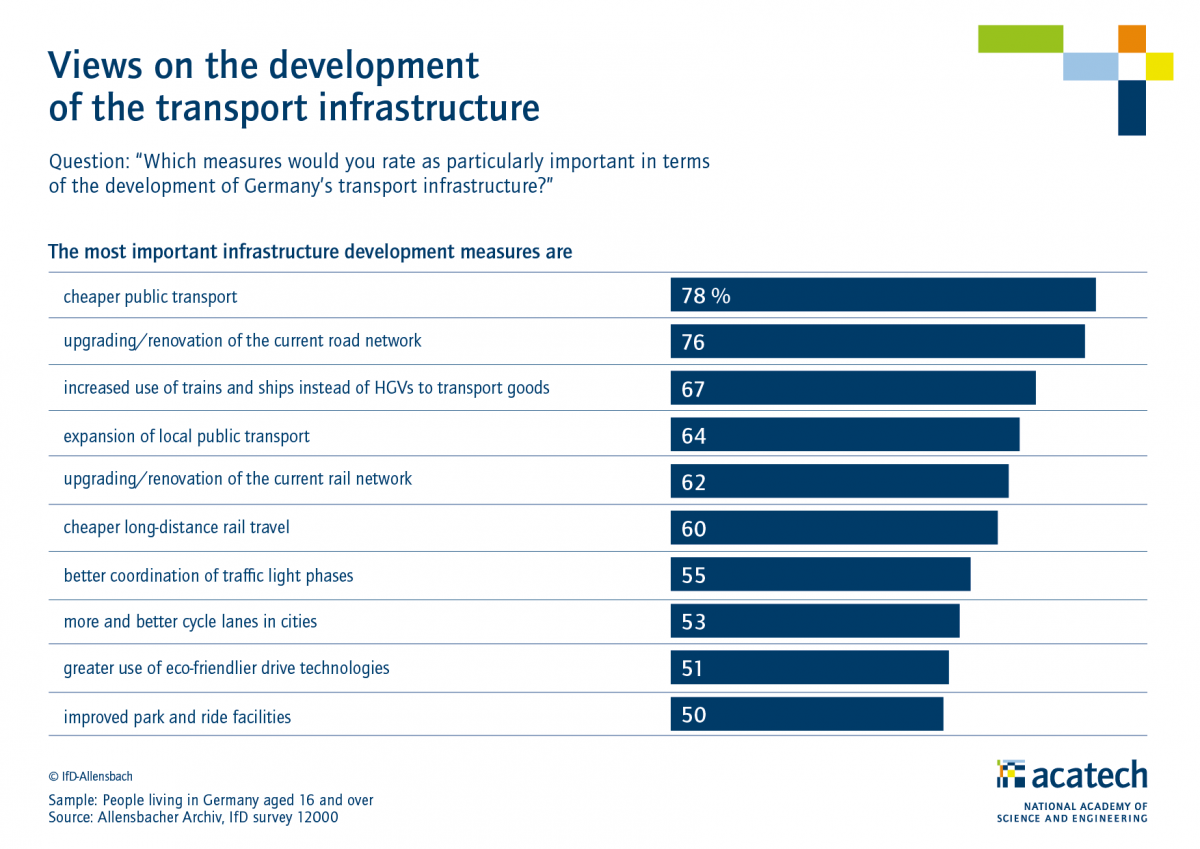 Expectations and wishes for mobility over the next few years

Over the next ten years, people expect to see an expansion of public transport, improved traffic flows thanks to connectivity, and an increase in electric mobility. The participants in the survey also expressed concerns that the cost of mobility could rise and about government-imposed restrictions. 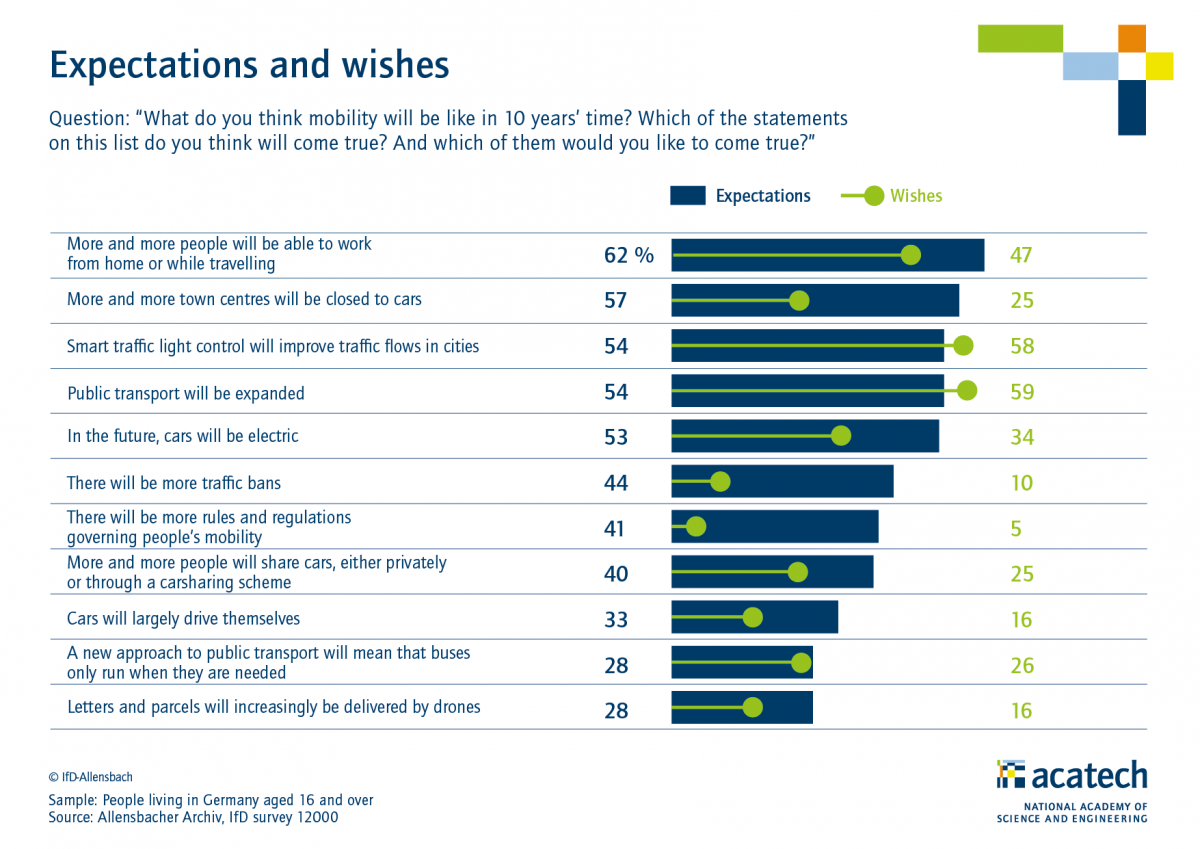 21 percent of participants in the survey say that they would consider buying an electric vehicle in the next few years. With just under 47 million cars currently on the road in Germany, this would equate to almost 10 million electric vehicles. 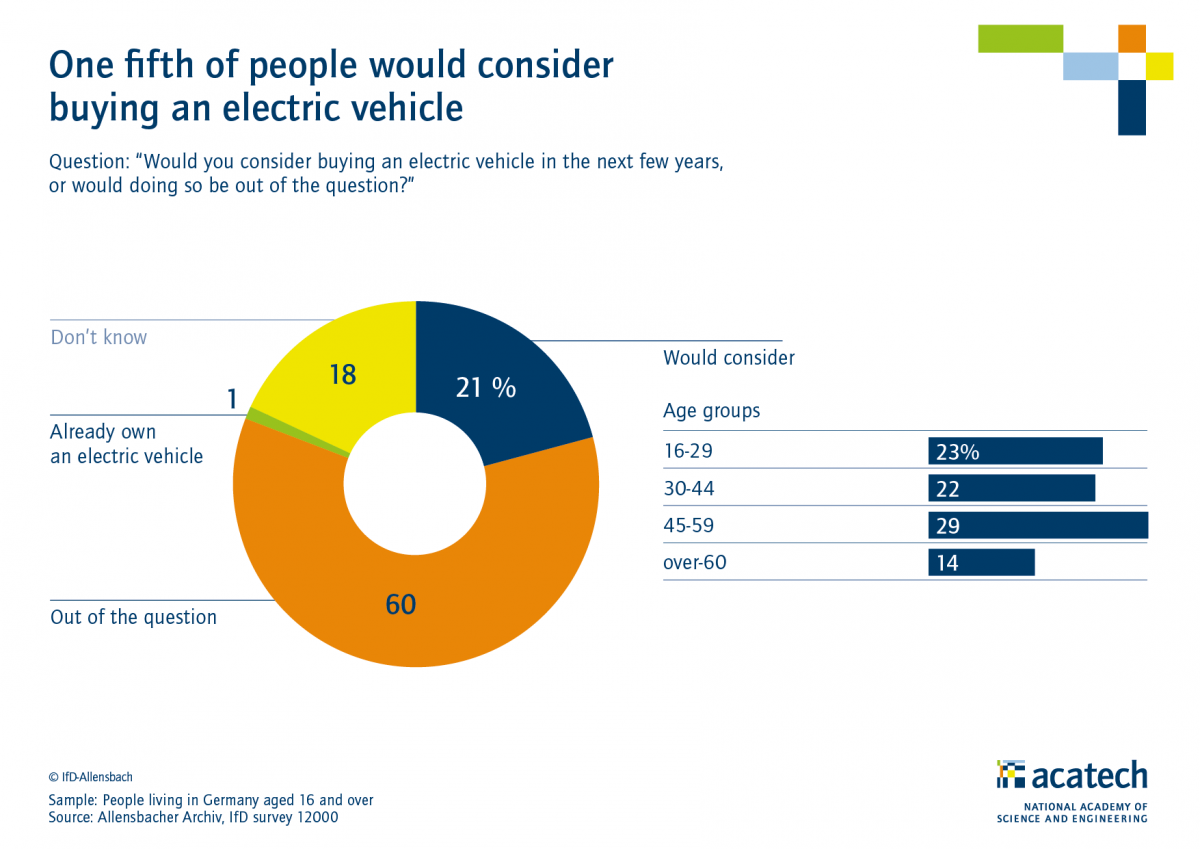 The greatest concerns among the majority of respondents related to the cost of electric vehicles and the charging infrastructure. Addressing these concerns should be a priority in order to maximise uptake among people who would already consider buying an EV and in order to reach a wider public. 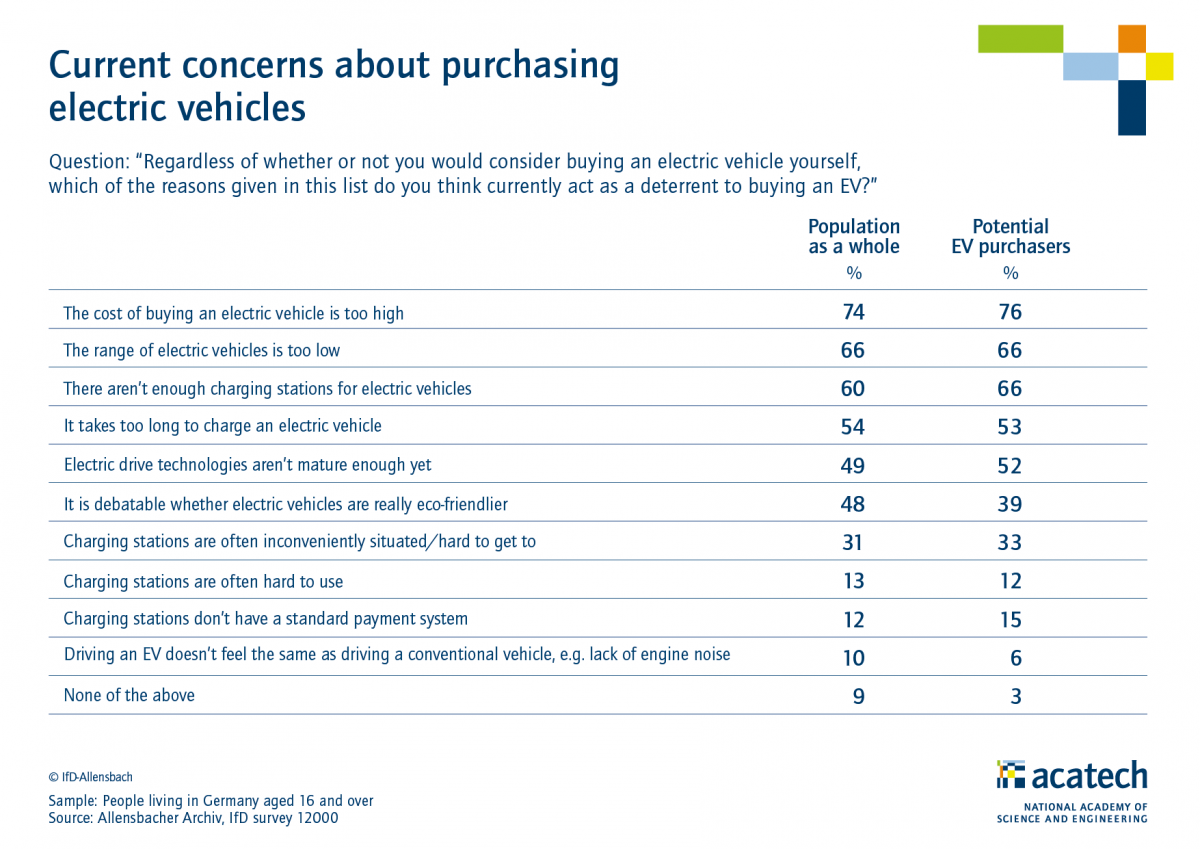 According to Thomas Weber, acatech Vice-President and Head of the priority theme Mobility, “It is vital to cater to all the stakeholders when developing a sustainable mobility system for the future. The future of mobility will not depend purely on technological advances and the regulatory framework. The key factor will be whether or not the mobility system is accepted by the public – by the people who use it both today and in the future. That is why this study focuses on what the public thinks. The results highlight the importance of developing mobility solutions tailored to the different requirements of urban and rural areas, and of taking people’s wishes and concerns into account to an even greater extent in the planning of our future mobility system. We are grateful to the IfD Allensbach for delivering these important findings that will directly inform our future work.”

The survey’s results will provide especially valuable input for the ongoing work of the National Platform Future of Mobility and the acatech study “New autoMobility II”, which describes a target scenario for automated and connected road transport and traffic in 2030.

Follow this link for a presentation on the results of the study “Mobilität und Klimaschutz – gesellschaftliches Problembewusstsein und individuelle Veränderungsspielräume” (German content).