Sustainable Nitrogen Use in Agriculture 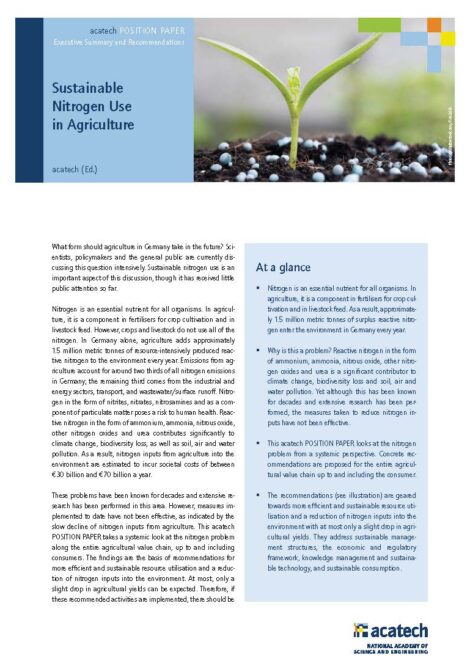 What form should agriculture in Germany take in the future? Scientists, policymakers and the general public are currently discussing this question intensively. Sustainable nitrogen use is an important part of this discussion, though it has received little public attention so far. Agriculture adds approximately 1.5 million metric tonnes of reactive nitrogen to the environment in Germany every year. Nitrogen in the form of various compounds is a significant contributor to climate change, biodiversity loss and soil, air and water pollution. As a result, nitrogen inputs from agriculture into the environment are estimated to incur societal costs between €30 billion and €70 billion a year.

These problems have been known for decades, and extensive research has been performed in this area. However, measures implemented to date have not been effective, as indicated by the slow decline of nitrogen inputs from agriculture. This acatech POSTION PAPER considers the entire value chain, from agricultural production right up to the end consumer. This provides the basis for a series of recommendations geared towards more efficient and sustainable resource utilisation and a reduction of nitrogen inputs into the environment.