Student drop-out in the Engineering Sciences. Multi-university analysis and recommendations 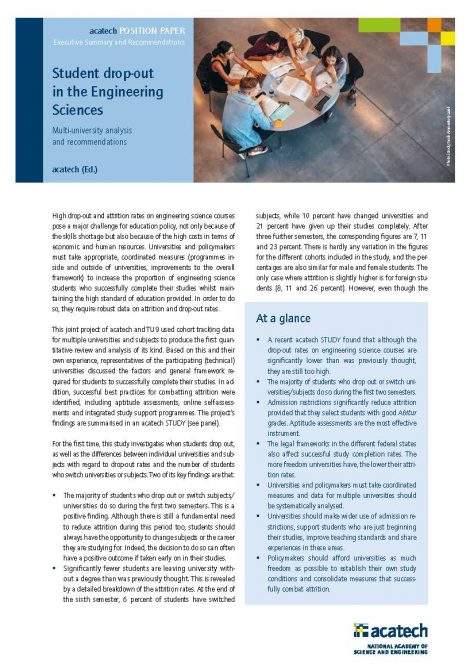 The acatech POSITION PAPER Student drop-out in the Engineering Sciences is based on a study of the same name carried out by acatech in conjunction with the T9 and three other universities between 2015 and 2017. Data from several first-year student cohorts (50,171 cases in total) for five engineering science Bachelor’s degrees was analysed in terms of differences with regard to drop-out rates and the number of students who switch universities or subjects. The participating universities were RWTH Aachen University, TU Berlin, TU Braunschweig, TU Darmstadt, TU Dresden, TU Dortmund, University of Duisburg-Essen, FAU Erlangen-Nürnberg, LU Hannover, Karlsruhe Institute of Technology (KIT), Technical University of Munich and University of Stuttgart. The project was funded by the Federal Ministry of Education and Research (BMBF).