Academies call for consequences from the Ebola virus epidemic 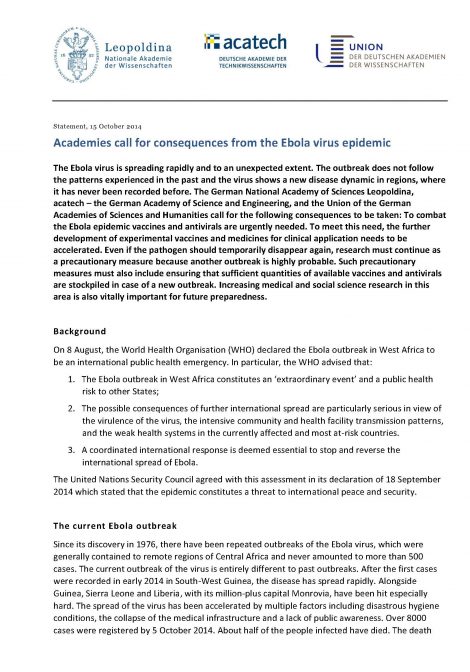 The Ebola virus is spreading rapidly and to an unexpected extent. The outbreak does not follow the patterns experienced in the past and the virus shows a new disease dynamic in regions, where it has never been recorded before. The German National Academy of Sciences Leopoldina, acatech – the German Academy of Science and Engineering, and the Union of the German Academies of Sciences and Humanities call for the following consequences to be taken: To combat the Ebola epidemic vaccines and antivirals are urgently needed. To meet this need, the further development of experimental vaccines and medicines for clinical application needs to be accelerated. Even if the pathogen should temporarily disappear again, research must continue as a precautionary measure because another outbreak is highly probable. Such precautionary measures must also include ensuring that sufficient quantities of available vaccines and antivirals are stockpiled in case of a new outbreak. Increasing medical and social science research in this area is also vitally important for future preparedness.

On 8 August, the World Health Organisation (WHO) declared the Ebola outbreak in West Africa to be an international public health emergency. In particular, the WHO advised that:

(1) The Ebola outbreak in West Africa constitutes an ‘extraordinary event’ and a public health risk to other States;
(2) The possible consequences of further international spread are particularly serious in view of the virulence of the virus, the intensive community and health facility transmission patterns, and the weak health systems in the currently affected and most at-risk countries.
(3) A coordinated international response is deemed essential to stop and reverse the international spread of Ebola.

The United Nations Security Council agreed with this assessment in its declaration of 18 September 2014 which stated that the epidemic constitutes a threat to international peace and security.